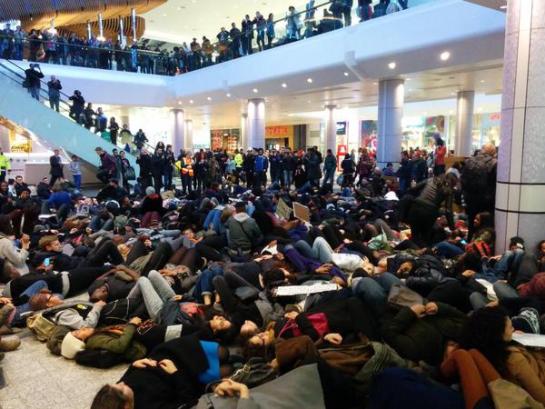 We the organisers: London Black Revs, NUS Black Students’ Campaign and London Campaign against Police & State Violence thank the hundreds of participants of our protest and a special thank you to those who travelled from West London, to Central London, Leyton, Sutton and Wandsworth to assist and greet arrestees as they were imprisoned overnight.

We are appalled that the Metropolitan Police chose to arrest 76 people, some of whom were non-participants, during the Eric Garner Solidarity Die-in protest in Shepherd’s Bush on Wednesday. This demonstration was called in solidarity to with Eric Garner’s family and protesters in New York and across the USA demonstrating against the failure to indict NYPD officers who were responsible for his death. This has happened in the context of the recent deaths of Tamir Rice, Tanisha Anderson, Michael Brown to mention a few Black lives ended by police officers.

Our protest was non-violent and was shut down because it was effective. The protesters have made it clear that the issue of police impunity to kill people of African descent is strongly felt and relevant here in the UK. Placards stating “Black Lives Matter” were held in London as we have suffered the pain and shame of no police officers held to account for the deaths of Joy Gardner, Sean Rigg and most recently Mark Duggan. “I can’t breathe” was also one of the last things that Jimmy Mubenga said and we also note his violent death under State supervision.

We condemn the Metropolitan Police’s indiscriminate practice of kettling, attacking protesters with metal batons and mass arrests. This dubious practice has resulted in several children, and visibly identified legal observers, one NUJ registered journalist and an unknown number of unfortunate bystanders, as well as dozens of innocent protesters, being held overnight across London for “violent disorder”.

This has become a terrible trend in public order policing. Mass arrests were used against over 145 UK Uncut protesters in 2011, 182 cyclists at the Olympic Critical Mass ride in 2012 and on 286 people during the Tower Hamlets anti-fascist demonstration last year. These huge arrests produced almost zero convictions. What is different in our case is that the charge has a maximum penalty of five years. This is far more serious than the offences alleged used in previous cases. It is wrong to use the charge of “violent disorder” on people who have been endured threats and physical assaults by Met Police officers and security guards. This disproportionate response appears to cast hundreds of people protesting against racialised police violence as a threat to public safety. We note the strange inconsistency in the seriousness of the accusation, and the fact that the vast majority of arrestees have not been given any bail conditions.

The probable motive for these mass arrests are, as the Metropolitan Police has admitted on record, for intelligence gathering on people who care about injustice and dare to speak up in public. We believe this is a despicable policy that threatens the civil liberties and fundamental human rights of us all. A Police force that routinely criminalises black people through stop & search, spied on the Lawrence family, recently called “institutionally racist” by its own Black officers association and is publicly shamed into paying out £400,000 to compensate a woman who had the misfortune to have a child under false pretences with an undercover officer is morally bankrupt.

To the arrestees, we stand with you in solidarity. We will announce our next action soon. If you were arrested or witnessed anything before or during the arrests, please get in touch with Green & Black Cross Legal Support at gbclegal@riseup.net

4 thoughts on “Joint Statement on the Westfield 76 arrests”