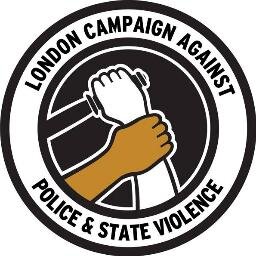 On Thursday 22nd January, it was announced by the London Mayor’s Office for Policing and Crime (MOPAC) that a £200,000 budget was set aside for a new tough anti-gang initiative called “Operation Shield” which is being trialled in the London boroughs of Lambeth, Westminster and Haringey for the next 12 months.

Operation Shield, according to the London Evening Standard, will enable the Metropolitan Police Trident team and local authorities to bring civil or criminal sanction to “known gang members” if any supposed gang member carries out an assault, stabbing or other serious crime.

“The penalties will range from recall to prison, gang injunctions banning them from parts of the capital or mixing with their associates, mandatory employment training courses or ejection from social housing.

The offender who triggers action will be fast-tracked through the criminal justice system for swift sentencing.”

In other words if a crime or misdemeanour has been committed then the police will be able to assign guilt to anyone they identify as a “gang member”. This then could lead to an entire family being evicted from their home and/or innocent people serving long prison sentences. This is akin to collective punishment, people being punished for acts for which they neither participated nor in many cases had any awareness of.

The precedent for this can be described by many working class families who have had family members wrongly convicted through Joint Enterprise. A law which has enabled the Police and the Crown Prosecution Service to imprison people from as young as 13 years old on the pretext of association. The campaign group JENGbA, who spoke at our 2014 conference, describe cases of predominately black youth who had been imprisoned for joint enterprise murder despite being unconscious, physically not present and in one case partially blind, that is the case of a Warrington youth Jordan Cunliffe, who is serving 12 years even though it was recognised in court that he was not at all involved in the fatal attack.

Also Operation Shield is using the precedent of the “fast-track justice” that was seen during the uprisings of August 2011. Anyone being pushed through this scheme may face prejudice and stigma in the courts as a “serious gang member” and thus face exemplary long prison sentences.

The use of the word “gang” in policing and crime contexts, we believe is a racialised term to stigmatise groups of working class black youth and stereotype them as criminals by default. This trial project will form the basis of more mass stop and search, mass arrests and arbitrary evictions in places like Brixton, Tottenham and council housing in Pimilco and Victoria.

If you want to get involved with LBR’s efforts see below and with our activities please contact us directly. 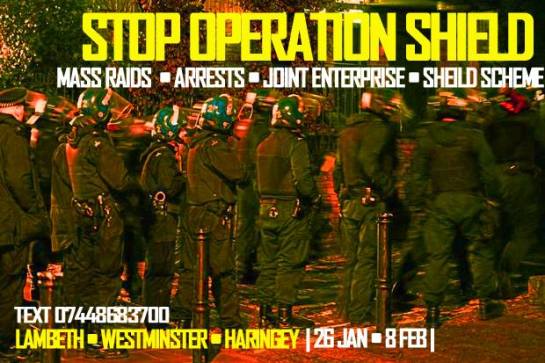 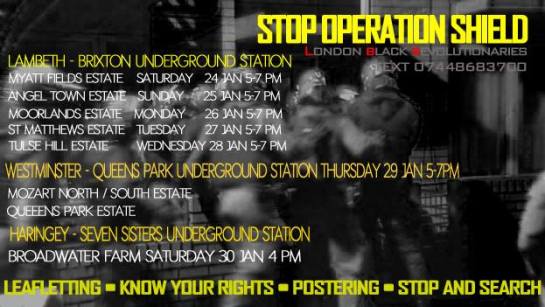 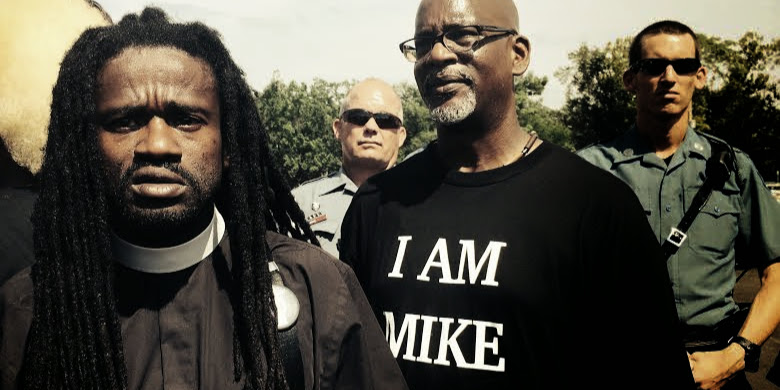 Black lives matter. Black lives should have mattered before they were gunned down or choked to death, both to the officers charged with protecting and serving them and to a judicial system that has exposed itself as involved in a deadly chokehold of its own.

The London Campaign Against Police and State Violence is supporting the United Families and Friends Campaign efforts along with others to conduct a national Ferguson Solidarity Tour to help build links with other campaigns against racialised state violence and murder.

The speaker from Ferguson, Missouri the place where the #BlackLivesMatter movement started is Reverend Sekou. We believe that his contribution to the discussion of resisting and organising against state racialised violence will be important for many to hear.

Our speaker will be share the platform in this rare and necessary event organised by Defend the Right to Protest and many others.

We are aware of that the London Black Revolutionaries have pulled out of the tour which is regrettable and we wish it could have been avoided. However their concerns about the issue of black democratic leadership in this movement is something that we share and will monitor this issue closely.

Our solidarity for those who continue survive or have lost loved ones to racialised state violence endures beyond these meetings, and our police station or court support, it will endure and continue to live when we come together on the street.

Whether in Westfield or Brixton, New York or Ferguson, Burkina Faso or Nigeria, Black Lives Matter.

In June last year, “D”, a black man while driving through Brixton was stopped and assaulted by police officers from the Territorial Support Group. The ferocity of attack left him with a cracked rib. After he pulled over, the officers jumped out of a van and claimed that they saw him make a drug deal. He was originally charged with “assaulting a police officer” but this was changed to “police obstruction” and the trial took place at the Inner Crown Court, earlier this week. D was put on a warning list and so was given only 18 hours notice before his trial date started making it difficult for LCAPSV to organise court solidarity.

After a 3 day trial, D was found “Not Guilty” by a Crown Court Jury, he is grateful for all the support he has received and is now taking considering his options about subsequent actions. Thank you for all the support whether in attending or even just sharing this incident.

D, a Brixton resident and a person of African descent was brutally victimised by violent police officers in June, last year. Details about his case can be found here.

He is asking for as many people as possible to support him at court tomorrow where he will be facing charges of Police Obstruction.

He was given only 18 hours notice yesterday about his court case so any turnout would be very appreciated.