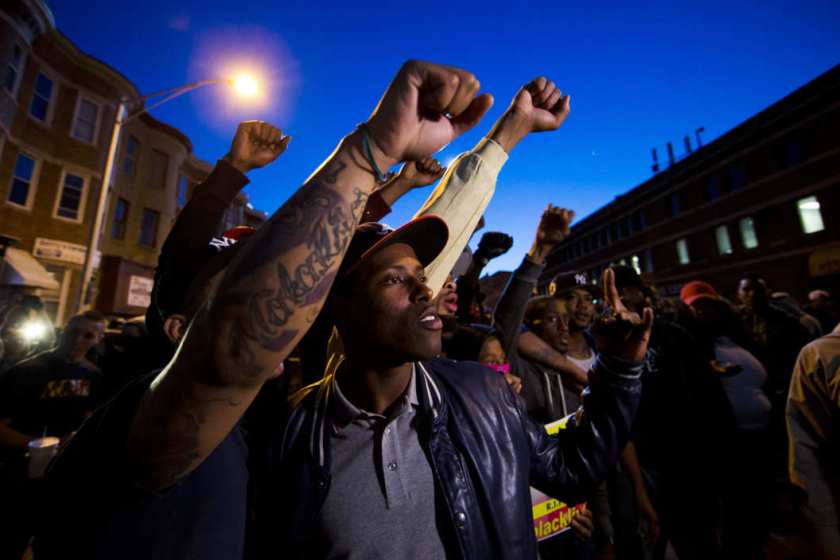 London Campaign Against Police and State Violence are calling for a solidarity vigil to stand with the family and friends of victims of police violence in Baltimore: Freddie Gray, Mya Hall and also victims of police brutality in the UK. We support the Fer

In Baltimore, the death of Freddie Gray has been at the centre of recent protests against police brutality. The 25-year-old African-American was taken into police custody after allegedly making eye contact with a police officer and then running away. He was dragged into a police van and left with a crushed voice box, and with 80% of his spine severed at the neck. The police are yet to give any explanation for his death. In response, the black community of Baltimore has risen up to demand justice and have closed down their city with almost a week of protests. Read more at Baltimore United

Mya Hall, an African-American trans woman and sex worker also from Baltimore, was shot and killed by National Security Agency officers after the car she was in was involved in a collision. Transgender people face even worse treatment by the authorities once it is discovered that they are transgender. The police and many sections of the press refused to acknowledge her gender identity and misgendered her in their reporting of her death. While there have been frequent marches and demonstrations for Black men killed in police custody, little is done for women, especially trans women, who are victims of police brutality. We cannot forget the plight of Mya and other Black transgender women and sex workers. All Black lives matter.

As we gather to mourn their deaths and show solidarity with those demanding accountability, we also remember and show solidarity with UK victims of police brutality. Julian Cole, a 21 year old British African-Caribbean man, was arrested by six police officers outside a nightclub in Bedford, England on 6th May 2013. While he was in police custody, his neck was broken, his spinal cord was severed and he became permanently brain damaged. It is now almost exactly two years since the original incident and yet the police officers responsible are still in active service and no charges have been brought against any of them. We stand with the Cole family to demand justice.

We also organise against the structural violence of the prison system. Mumia Abu-Jamal is an internationally recognised Black writer and radio journalist, and former member of the Black Panther Party who has spent the last 30 years in prison, almost all of it in solitary confinement on Pennsylvania’s Death Row. We believe that he is wrongly convicted and now he is hospitalised and the authorities are preventing his loved ones from contacting him. We stand with all who say FREE MUMIA ABU JAMAL.

Across countries, police and state violence is racialised, disproportionate and destructive towards Black communities. Time and again we see Black people suffer at the hands of a racist state. On a daily basis, innocent people are stopped and searched. Neighbourhoods have been left to waste away in destitution and then “regenerated” to price and push poor Black families out. The police are able to terrorise and kill with impunity. The only way that we’ll stop this cycle of violence is to organise as a community and fight back. This has happened in Ferguson and it’s happening right now in Baltimore. Baltimore Uprising is a community-led initiative which is organising the community in light of the recent killing of Freddie Gray to demand justice. Along with daily demonstrations, they are providing artistic outlets for children, organising safe havens in religious spaces and providing lunch for school children on days that schools are closed. Similar initiatives are also taking place here in the UK, with groups like R Movement and Housing Action Southwark and Lambeth organising food distribution for the homeless and community supper clubs. LCAPSV will work with these groups and others to organise against pervasive state violence.

Martin Luther King once said that “riots are the language of the unheard”. While police officers break necks with impunity, we will not be overly concerned with broken windows. When we say “No Justice, No Peace”, this channels lesser known Martin Luther King quote: “True peace is not merely the absence of tension: it is the presence of justice.”

From Bedford to Baltimore, UK to US – BLACK LIVES MATTER – NO JUSTICE NO PEACE