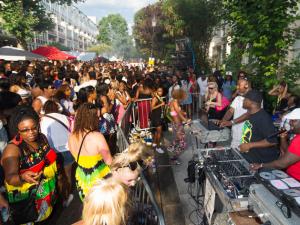 The day following this years Notting Hill Carnival celebrations, Ken Marsh, the Chairman of the Metropolitan Police Federation made a calculated move to smear carnival-goers. Not only is this part of a concerted attempt to remove Carnival from the cultural landscape of London, it represents the latest attack on black social life in a summer where the Met have already declared a war on young people, using extreme force to stop young people on school holiday from having water fights, and encouraging the public to report entirely legal and peaceful behaviour.

The figures put out are dishonest: while 43 officers were injured working at Carnival, it is not at all clear how many of those injuries, if any, were sustained as the result of contact with members of the public. Ken Marsh is obviously massaging statistics to make a point where there is none to be made. A significant number of arrests were also made for non-violent drug-related offenses linked to the use of the Psychoactive Substances Act. Furthermore the comparison made by Marsh to Glastonbury is disingenuous: Carnival has ten times more attendees than Glastonbury, which puts the 450 arrests this weekend compared with 167 at Glastonbury into a more clear light. The introduction of Glastonbury by Marsh speaks to broader code at work in his comments: Carnival, a free black cultural event taking place in the heart of the city, is framed as inherently violent, uncontrollable and a drain on public resources. In contrast, Glastonbury, where predominantly white crowds can pay large sums of money to watch rock music in a rural setting, is safe and peaceful.

We would suggest that it is in fact the very presence of Police at Carnival which is the problem here. Section 60 was imposed over Carnival weekend. This allowed police officers to stop and search members of the public without grounds. It has been consistently demonstrated that when Stop and Search is deployed in this way it unfairly targets black and brown people, while failing to do anything to effectively detect crime. In addition when carnival draws to a close on each night, Police in riot gear move aggressively through crowds forcing people from the streets. In such a context it would have been understandable if the police had experienced hostility from the public. Ken Marsh’s story is pure fantasy. Carnival has, since its inception, been about a celebration of Caribbean culture in the face of state and everyday racism. It is open to all and is a celebration of collective spirit which is sadly lacking in London at the present moment. If we allow statements like that put out by the Metropolitan Police Federation to go unchallenged there is a real possibility we will soon lose over 50 years of Caribbean history in this country encapsulated by Carnival. If that happens we will truly know a crime has been committed.

This site uses Akismet to reduce spam. Learn how your comment data is processed.