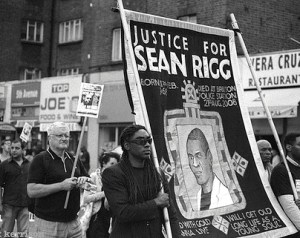 A jury today found Sergeant Paul White of the Metropolitan Police not guilty of perjury. The trial followed an investigation into Sgt White’s evidence at the inquest concerning the death of Sean Rigg.

This was the first time criminal charges for perjury have been bought against a serving police officer following a death in police custody. Sgt White was the custody officer on duty the night that Sean Rigg died at Brixton police station on 21st August 2008.

Evidence cited during the trial demonstrated Sgt White had given a detailed but false version of events the night Sean died. His statement said he checked on Sean in the police van, but CCTV evidence proved this was not the case.

1. Victim Right to Review – without this and the family’s determination, a case of such public importance would never have come to trial. The Crown Prosecution Service should have acted on the evidence earlier, saving the family and other parties two more years of uncertainty and legal costs.

2. Unacceptable length and poor quality of IPCC investigations – it has been four years since the damning inquest into Sean’s death and eight years since his death. IPCC failings going back to 2008 and 2009, including delays and inaction, allowed unchallenged false evidence to go before the inquest, and ultimately provided Sgt White with a plausible explanation for his false evidence.  Urgent lessons must be leant by the state bodies responsible for oversight and accountability following a death in police custody, to prevent a repeat of the exhaustive delays in this case.

3. All police officers have a professional duty to provide a full and truthful account of events, where there has been a death in police custody. Officers are not above the law and if it is believed that officers have not given true and accurate evidence, they will be held to account. Families will pursue the truth.

“I am devastated. The jury’s verdict was a surprise to me and my family, but I will continue to fight for full accountability for those officers who were on duty at Brixton Police Station. That a custody sergeant can give false evidence in connection with a death in custody, something he accepts he did, is a shocking state of affairs. I await the MPS decision on disciplinary charges on this issue.

The fact that Sgt White’s defence rested on the failure of the IPCC to challenge his false evidence in March 2009 is a cause of significant public concern. The public is entitled to expect better from the police and those who are charged with ensuring police accountability.

I will be raising with the CPS, and if necessary Parliamentarians, the question of what ‘agreed facts’ go before criminal juries in relation to deaths in custody, given that the narrative conclusion of the inquest jury was excluded from the criminal trial.”

“Sean Rigg’s family have struggled at every stage of this eight year process for honesty, truth and justice.The failure of the IPCC to conduct an efficient, robust and competent investigation and the inexcusable delays in CPS decision making have been exposed as a barrier to proper democratic police accountability. If left unchecked, this institutional inertia will allow abuses of power to go undeterred and continue to undermine public confidence in the police complaints system.”